After Pietro da Cortona (b. Cortona, 1597-d. Rome, 1669)
The drawing is after the Medici family coat of arms, supported aloft in the sky by nude putti and surrounded by a wreath of trophies of war, which appears in the centre of Pietro da Cortona’s monumental ceiling fresco in the Sala di Marte in the Palazzo Pitti, Florence. Cortona was commissioned to paint frescoes of Allegories of Virtues and Planets on the ceilings of seven rooms in a suite on the piano nobile, which, with the exception of one room, he completed in 1640-47, returning thereafter to Rome.

The drawing is by the same hand as a group of copies after other designs from Cortona’s fresco cycle in the Palazzo Pitti, formerly with the Rome dealer Marcello Aldega, of which only three seem to have been published (see attachments I- VII).1 These, too, are exquisitely executed in black and white chalk, but with the difference that the ex-Aldega drawings are executed on a grey-blue prepared ground, which in some areas has begun to oxidise. Like yours, all three of the ex-Aldega copies are identically inscribed in pen with a fine nib with a baffling series of minute letters, numbers and symbols, presumably code for identifying areas in the fresco with the same colour, texture or tone. One of the drawings (Muller III), after Cortona’s Scene from the Story of Justinian in the Sala di Apollo, has a text written in pen on the verso, and within the text appears the date “Maggio 1653,” that is six years after Cortona’s departure from Florence. The ex-Aldega drawings were once attributed by Prof. Karl Noelhes to Ciro Ferri (1634-1689), a pupil and close follower of Cortona, who was long active in Florence. Ferri’s handling is, however, more forceful and does not have the subtlety and exceptional attention to detail as the drawings in the present group.

The sheet and the ex-Aldega drawings suggest a copyist of uncompromising accuracy. Even so, close examination of the copies in conjunction with the corresponding details from the frescoes suggests they were copied simply by eye and not by mechanical means as, for example, there is no trace of squaring. Taken at random, one passage in your drawing illustrates the sort of licence that may be taken from such a method of reproduction, although such inaccuracies by no means detract from the end result. In the present drawing, the left thigh of the putto holding up the crown in the top left seems to touch the head of the putto just beneath, who peeps out from behind the shield. In the fresco, on the other hand, an appreciable gap of sky separates the bodies of the two putti. The greater finesse of your drawing, compared with those formerly with Aldega, may be explained by its having been made directly onto paper. The draughtsman’s extraordinary command of detail is perhaps best seen in the different components forming the wreath of arms from which the Medici coat of arms makes its egress. These accoutrements are drawn with a much lighter touch so that the coat of arms and its supporting putti appear to be advancing in a nearer plane.

In my opinion of Nicholas Turner all of these drawings after Cortona’s Palazzo Pitti frescoes are very likely to be by Livio Mehus (born Oudenaarde, 1627; died Florence, 1691), and this view is based on their style, their exceptional skilfulness as facsimile copies and circumstantial evidence.2 The putto perched at the top of the scroll at the summit of the shield, who does not seem to be engaged in any heavy lifting and who looks mischievously sideways to the right, is quintessential Mehus, even though its origin is a figure by Cortona, and similar types may be found throughout his paintings and drawings. (The equivalent putto in Cortona’s fresco is fair-haired and far more virtuous in demeanour.) Mehus is said to have been a boy of 10 when he arrived in Italy with his family in c. 1637, settling in Milan. Some four years later, when on a journey to Rome, he happened to stop at Pistoia where he was introduced to Prince Mattias de’ Medici, who admired his drawings of landsape and, in 1645, enrolled him as one of Cortona’s assistants in the ceiling decorations of the Palazzo Pitti. The youthful Mehus, however, unsettled by nature, remained only briefly in Cortona’s equipe, travelling soon thereafter to Lucca, Genoa and then more widely in Piedmont and Lombardy.

Mehus did eventually return to Florence and, indeed, to the Prince’s service, remaining there, with interruptions, from c. 1650 to c. 1655, the likely period in which the present drawing and those formerly with Aldega were made. After even further peregrinations, he eventually settled in the city for good. The initiative for making the copies is likely to have come from the Medici, Mehus’s stalwart patrons, rather than from the elderly Cortona, who was then back in Rome. The idea may have been to publicize Cortona’s frescoes through a series of engravings based on them—though the designs of the drawings would have had to be reversed if the corresponding prints were to be in the same sense as the compositions of the frescoes—but such a huge task may well have been abandoned. If Mehus had indeed been involved in such a project, his restless character might also have thwarted progress.

As research on Mehus’s drawings continues, it is clear that he was a prolific and accomplished copyist. A good group of his drawn facsimiles of Guercino’s caricatures is in the Uffizi, Florence, while others are widely scattered in European and North American collections.3The series was almost certainly made on the commission of the Medici, perhaps to assess the importance of Guercino’s caricatures as potential acquisitions for the Grand-ducal collection. Mehus probably made them in the Casa Gennari, the house in Bologna of the painter’s heirs, well after Guercino’s death in 1666, and their fidelity to the spirit of the originals is truly remarkable.4

Of Mehus’s independent drawings, his Angel appearing to Hagar and Ishmael in the Desert in the Biblioteca Marucelliana, Florence, is perhaps the closest in handling and technique to the present drawing, especially in the play of the passages of white chalk against black and in the short jagged strokes in the darks.5 In Chiarini’s view, this looseness of touch and a sense that the forms are unravelling (both typical traits of his graphic style), point to the painter’s late period, although it must be said that there are passages of almost identical handling in the present drawing. Finally, I am told on good authority that the handwriting on the back of one of the ex-Aldega drawings is indeed compatible with that of Mehus.6

4). Both Guercino, and his nephew Cesare Gennari after him, worked as agents for the Medici in the acquisition of significant works of art on the market in Bologna, which undoubtedly facilitated Mehus’s entry into the Casa Gennari.

6). In the opinion of D.ssa Novella Barbolani of Rome University, who has worked extensively on Mehus. 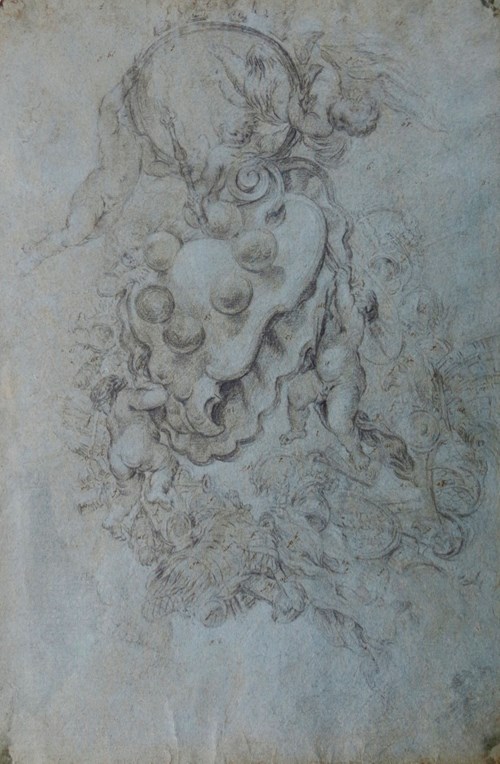 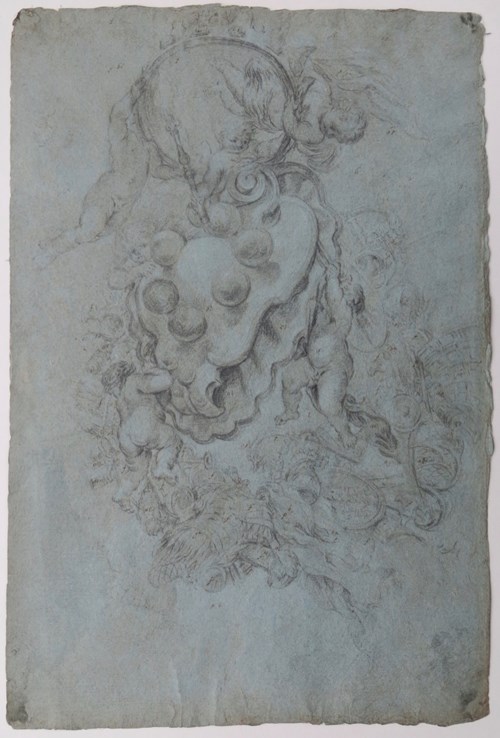 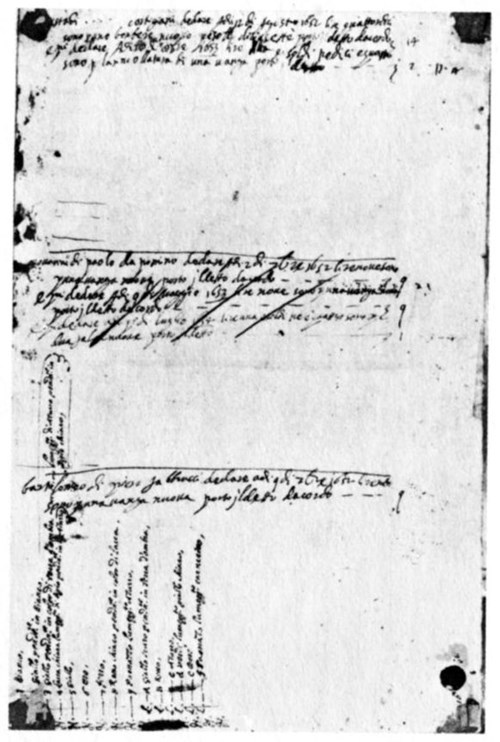 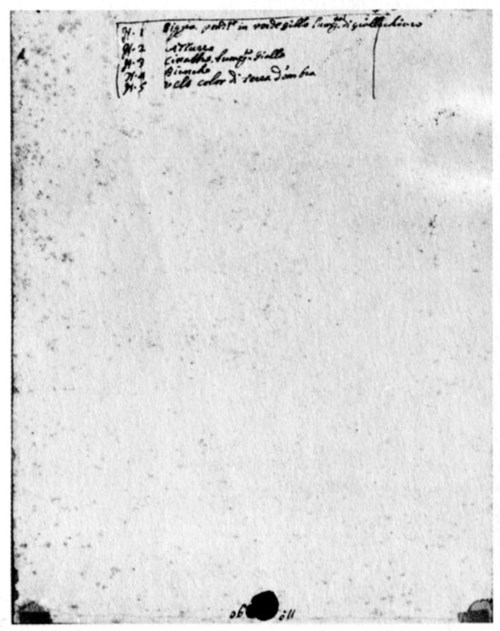 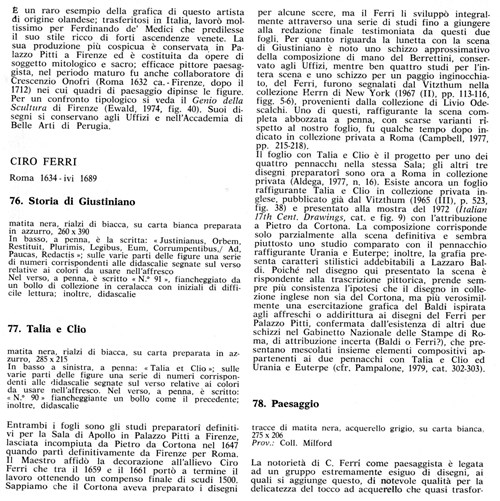 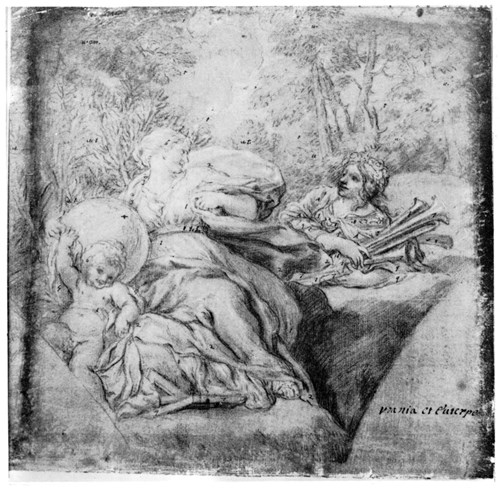 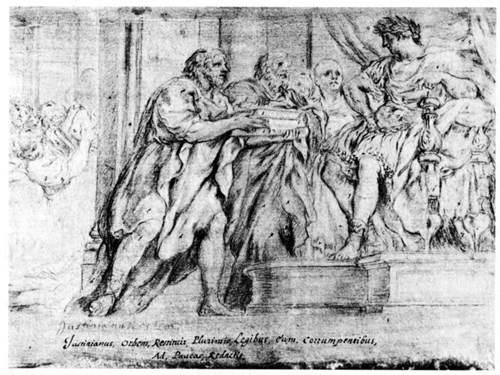 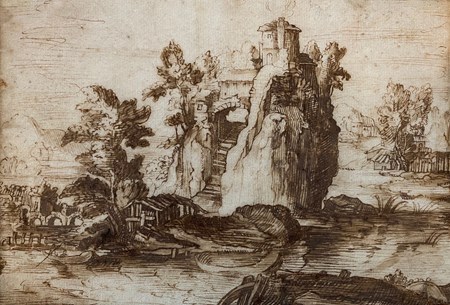 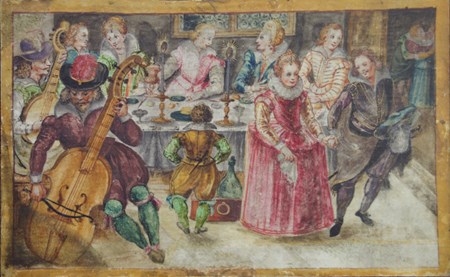